Detroit's Servself, ca. 1910, on the corner of Woodward and Larned, described itself as "high-class."

Dennett's -- established in 1883 by an ardently religious man who was opposed to alcohol and decorated his eateries with religious mottos. He built his "empire" of 13 East Coast restaurants on dairy dishes, fishcakes, hash, beans, egg dishes, pie, and coffee. Later his chain was absorbed by Childs.

Childs -- the McDonald's of its day, it gained fame by hiring attractive young women to flip pancakes in the window of each restaurant. It was founded in the 1890s by three farmboy brothers from New Jersey. Childs regulars, accustomed to low prices and a democratic range of fellow eaters, were confused by the elegant exterior of the Fifth Avenue Childs opened in 1923. They gawked at it, hesitant to go inside.

Waldorf Lunch -- the first was opened in 1904, in Springfield, Massachusetts. In keeping with its full name, "Waldorf Lunch System," everything about it was highly standardized. All food was prepared in a central commissary and delivered to the units. The chain, which moved its base to Boston, served 36 million meals in 1920.

Pig 'n Whistle -- Los Angeles chain of soda shop eateries. It started in 1908 on South Broadway, and by 1926 there were ten units and another seven in planning. The chain developed creative sandwich names suggestive of California living such as Beach Walk, Physical Culture, and Sunburst.

In Gastronomica, I discuss how dairy foods became popular noonday fare in the 1880s. Although they had some meat dishes, the menus in most lunch places included crackers and milk, bread and milk, and cereal and milk. Or, a patron could order a bowl of cream. When brand-name cereal makers wanted to introduce a new product, they put it in these places and gave people a chance to try it out. 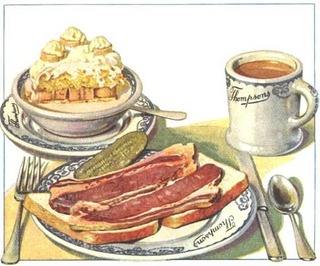 A typical meal of a corned beef sandwich, banana shortcake, and coffee at the John R. Thompson chain.

With restaurants in 43 cities, the Thompson chain of dairy lunch eateries was a powerhouse in 1925. A brochure assured readers that they would get plenty of carbohydrates in the meal above, and suggested that dessert was a vital part of every meal. Yeah! 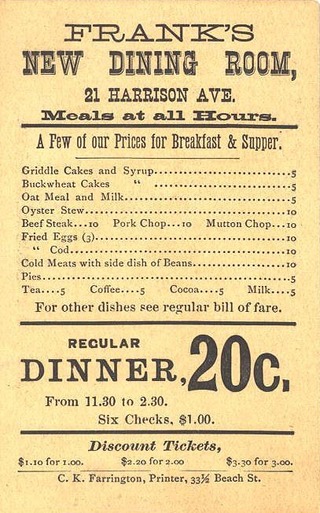 This Boston lunch room of the 1890s offered the standard fast food fare of the time, including oysters.