Alice Foote MacDougall's 1920s chain of New York City coffee shops (called "coffee" shops to attract men) made her almost a household name. It didn't hurt that she used a professional publicist to get her into the papers and magazines constantly.

By 1923 Clara Ellis' Miss Ellis Tea Shop in Chicago, established in 1910, had made the former office manager one of the most successful business women in the country. In 1929 her 84-year old mother served as corporate VP.

Around 1907 Charlotte Duncan rented an old one-room shack on the beach in Ogunquit, Maine. She painted the Dutch door bright green and added an old-fashioned brass latch and Colonial knocker. Inside she filled display shelves with small antiques she had collected in Europe. Decades later, a much bigger Whistling Oyster was still going strong and still using the green and white color scheme.

When Ida L. Freese took a 21-year lease on the old Vanderbilt mansion at 379 Fifth Avenue in New York City in April of 1914, she acquired a site for her fourth tea room. She had already made a smashing success with her first three: The Colonia, The Vanity Fair, and another inside the O'Neill department store.


Grace E. Smith made it big in the cafeteria field. After graduating from Wooster College in 1908 she managed a YWCA lunch room. In 1916 she shocked her family by opening her first cafeteria in Toledo, Ohio. (They thought the restaurant business was too low-class for a college graduate.) She became the first woman president of the National Restaurant Association in 1940.

"Domesticating the Restaurant"
A chapter in From Betty Crocker to Feminist Food Studies, University of Massachusetts Press, 2005. 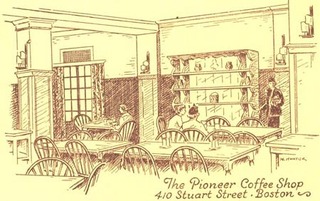 Note the cupboard, rather sparsely furnished in this case.

In my essay I write about the women who ran restaurants in the teens and 1920s and the kind of ideas they had about what a restaurant should be like. Many of them had studied home economics and felt they had a mission to civilize the restaurant. Keep in mind that many middle class people distrusted restaurants at the time and considered them dirty and unpleasant. They viewed them as "the tail end of the saloon," meaning that their patrons were more interesed in drinking than eating.

The women I focus on were not the first to run restaurants (legions of women had operated eating places, often with their husbands), but they were highly educated -- in a field where many had not finished high school. They considered themselves reformers, and they used the middle-class home as their standard of how things should be done.

Their restaurants often stressed a homelike theme -- through the food they served, the way they furnished their dining spaces, and even in customs like putting flowers on the table, hanging curtains at windows, and giving free second helpings. Needless to say, their kitchens were squeaky clean. 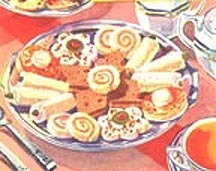 Their food ranged from simple dishes such as casseroles and rice pudding to fancier things such as tea sandwiches and tomato aspics. 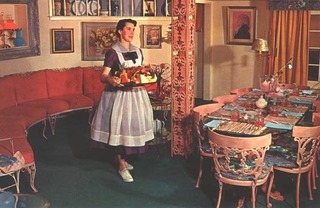 The feminine look carried a wee bit too far?